Yesterday was our longest drive, and unfortunately it was not a day to stop and take pictures. We drove over Lewis Pass from Christchurch to Pohara, and had to be in Pohara at 6:15 to meet our hosts for the potluck we were going to. We left late enough that we really didn’t have time to stop, so we didn’t. It was a seven-hour drive, with two five minute stops for gas.

The countryside looks a lot like the Sierras, although there’s less granite and more limestone. Most of the timber is farmed, however, giving the trees a rather combed look — they’re all the same height and planted in rows. The road into Motueka, off the pass, comes down this narrow river valley that’s farmed. It’s a lot like the river valleys in Monterey or Half Moon Bay, coming off the hill, just longer. Montueka is a small beach town, and definitely has the coastal beach feel.

We had a lovely time at the pot luck attended by about ten other Quakers held in our honor last night. We spent time talking about Pacific Yearly Meeting, the Quarter and its corporations, and the work that our meeting does, as well as some of the challenges our meeting faces. Golden Bay Meeting has been around for about thirty years, and is clearly a close-knit group. They have about thirty members, and meeting for worship each week ranges between ten and fifteen folks.

Today we retrace our steps before curving out to Picton to catch the inter island ferry to Wellington. We’ll return the rental car in Picton, and get a new car in Wellington — the rental company doesn’t let the cars go on the ferry; it’s too hard for logistics keeping the right number of cars on each island.

This morning we got up early and did the drive to Christchurch from Dunedin, getting in at about noon. We’ve been doubly blessed by Quaker hospitality today; we’re staying at a home of some Friends in Christchurch who are traveling at the moment, and have a lovely view of the city from their living room. We got here, met them, learned about the house and chatted for a bit, and then they were off for their long weekend getaway. We spent some time catching up on emails from the people we’re staying with later in the trip, and then met up with Michael Winter, another Friend with Christchurch meeting.

We had coffee at Zeros, a little cafe down by the hospital just a few short minutes from where we’re staying. Michael’s vocation is education, and his avocation is beekeeping, so we learned what it takes to start a new queen in a hive of bees — it’s a lot more complicated than I thought! After coffee — quite good, but all of the coffee we’ve had in New Zealand has been very good — he was kind enough to take us on a driving tour of downtown Christchurch.

This turned out to be even more valuable than it sounds, because there are a lot of roads still closed with construction from the earthquake recovery. Not the one they had this weekend, but the big one from a few years ago. There are piles of rubble where buildings should be, new buildings being constructed, and in some places there are stacks of shipping containers along the side of building facades that they’re trying to save. It’s very sobering — it reminds me a little of after Loma Prieta in Santa Cruz, but the scope is much bigger than just the downtown Santa Cruz area.

I didn’t bring my camera with me for the drive; it would have been too difficult to shoot out of the car, and somehow it didn’t seem right to be photographing buildings in the process of being torn down or built up.

We had dinner at Zaffrons, which our hosts told us about, a Vietnamese-Thai fusion restaurant that was really good. They’re not on Yelp, though, which was frustrating, because we didn’t bring the address with us, and ended up finding it by accident after choosing another restaurant that was coincidentally on the same corner.

After dinner while getting ready to drive back, I was programming Meg’s phone (she has a Nokia 1520, so we’ve cached offline Here maps), and there was a small earthquake.

Tomorrow we drive overland to Golden Bay, and tomorrow night is a Quaker potluck. It’s a long drive tomorrow, and we’ll probably drive it in shifts. So far I’ve done all the driving. I’m finally getting pretty used to it, although it’s still anxiety-provoking making right turns.

Today we drove from Eastern Bush to Dunedin. We got here at about 1:00, and poked around the city center and the university some. Meg found the psychology department at the university, which was in a cute little house near the center of campus.

After that we drove out on the Otago Peninsula to visit the Royal Albatross Center. The ride out the peninsula is hair-raising; it’s a narrow highway with maybe a meter between you and the ocean at high tide. It’s not a long drop down, but around every corner you wonder if you’re just not going to clear the turn or not. No guardrail, no curb in most places, not even a bike lane. Just a narrow strip of soil, a three meter drop, and then the water.

The Royal Albatross Center was wonderful. We spent nearly an hour watching four nesting albatrosses feed their chicks (one per bird), while another three did lazy turns over the ocean and cliff in front of us. I got a lot of photos, but they’re going to take some work, as I only have the kit telephoto, and so it’s hard to know how much detail you’re going to get. At a minimum, the photos need cropping, which is why I won’t post them now.

The albatross is a big bird — their wingspan is about three meters. In the air, they look big, but it’s hard to realize how big they are; on the ground when one stretches its wings, you get the full import of how big the bird really is. They look for all the world like giant seagulls on steroids; the coloration is very similar to a gull; they’re just huge.

After the Royal Albatross Center, we headed back into Dunedin for our next AirBnB, with Mick and Mary Strack. They’ve been using AirBnB while traveling in Europe, and decided to open up a bedroom in their house now that their daughter is grown. It’s a very nice house; very spacious; the bathroom has both a shower and a whirlpool tub (which we didn’t use). We enjoyed a very pleasant cup of tea and conversation with them downstairs before heading off to get cleaned up for the night.

Today we drove the two hours out to Milford Sound and took an excursion on the sound. The ride gets progressively windier and windier as you head into Fjordland National Park, and then at the top of the hill is Homer Tunnel, a really long narrow tunnel with a 6% grade downhill through the mountain. After the tunnel is about another 20km of road before you reach Milford Sound.

The sound really isn’t a sound; it’s a fjord, carved by glaciers. It was pouring rain when we got there — complete with thunder and lightning — and I was really worried that we wouldn’t be able to see much. Nothing could be further from the truth!

All down the rock walls were temporary waterfalls, which start when the rain starts, and flow for 6-12 hours after the rain stops. It rains two hundred and sixty days.a year there — it gets the most rainfall of any populated area on the island. 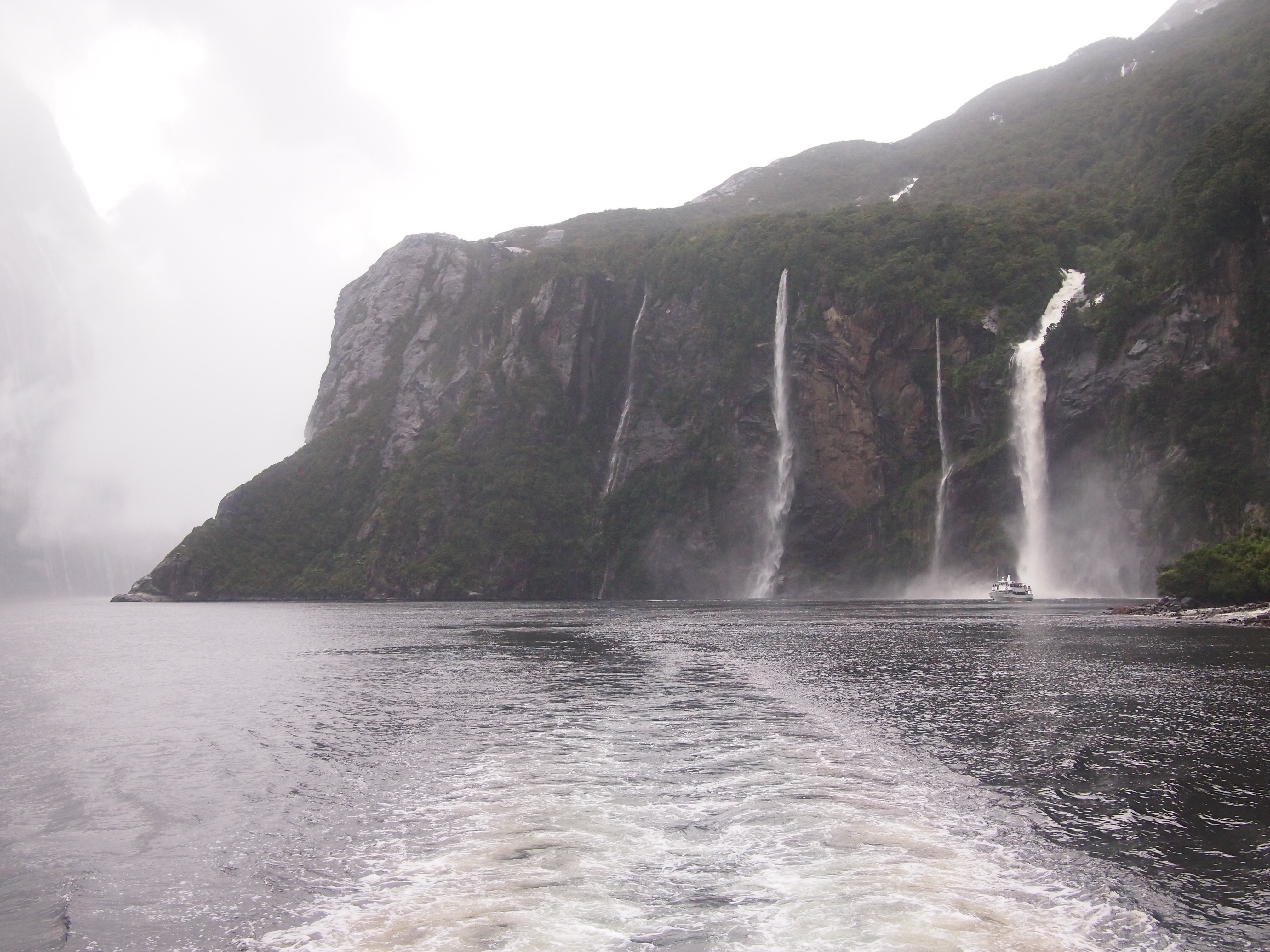 Here’s one of the permanent waterfalls: 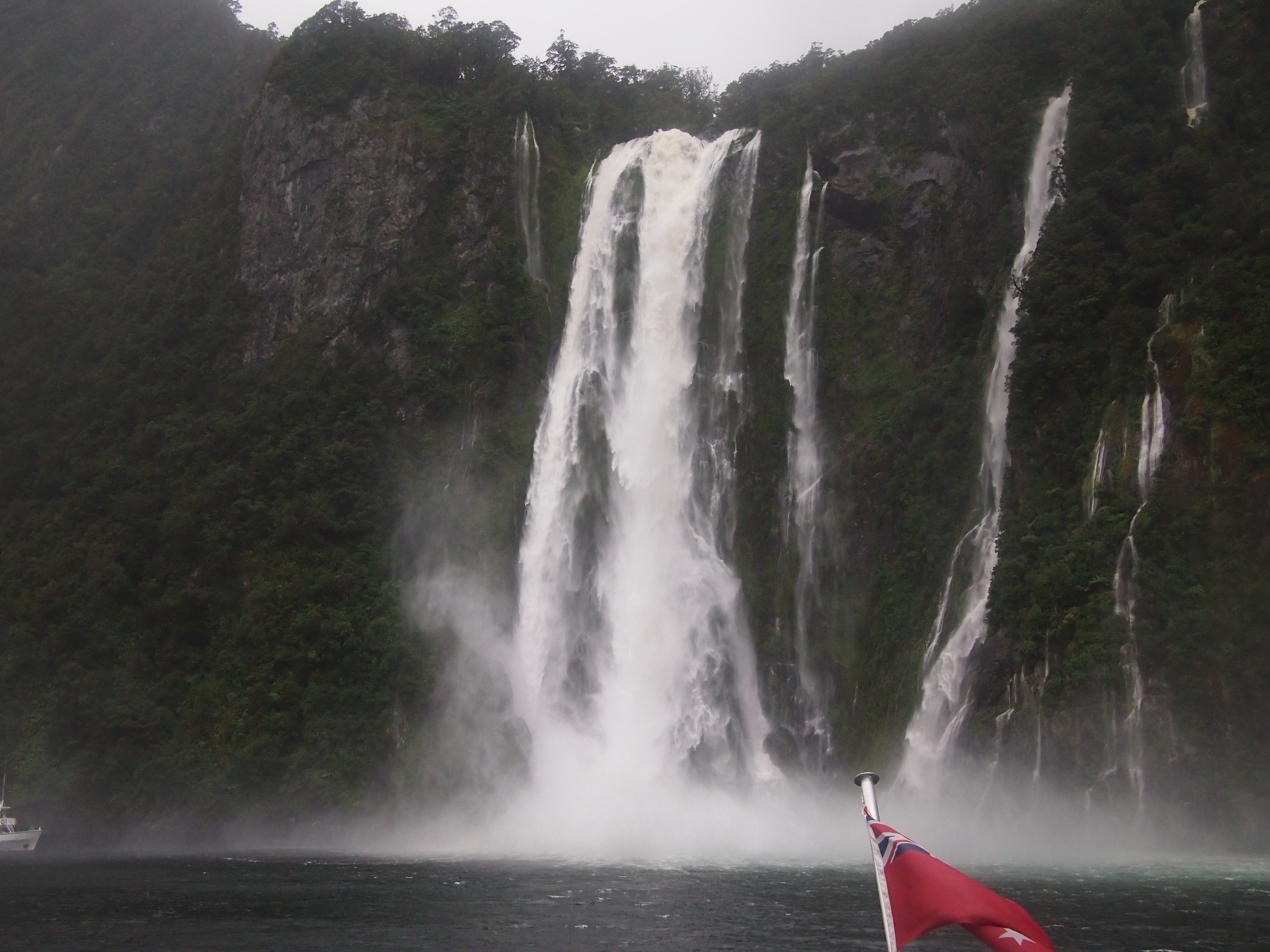 Along the cruise, we saw fur seals, which are really sea lions, as well as bottle nosed dolphins. The dolphins loved swimming in the wake of the boats; it was fun to be up near the wheelhouse and hear all of the cruise captains talking on the radio about the best places to go to show the dolphins to their passengers.

Our excursion was with Real Journeys, and we had a really good tour guide describing the history, geology, and wildlife of the region. The cruise lasted about two hours, and included a stop at the “Discovery Center”, a little floating platform with an underwater observatory 10m down into the sound. You could climb down the stairs and then look out into the water. The marine habitat is very interesting, apparently — the freshwater floats on top, and filters out a lot of the light, so you end up with a lot of deep-sea marine life living actually quite close to the surface of the water.

After Milford, we doubled back — the only way out is in — to Te Anau, where we stopped at a coffee shop and had corn fritters and espresso for an early dinner, and did a bit of grocery shopping and topped up the gas tank before heading out to Eastern Bush. Tonight we’re staying on a sheep farm with about 1800 ewes and 2400 lambs. 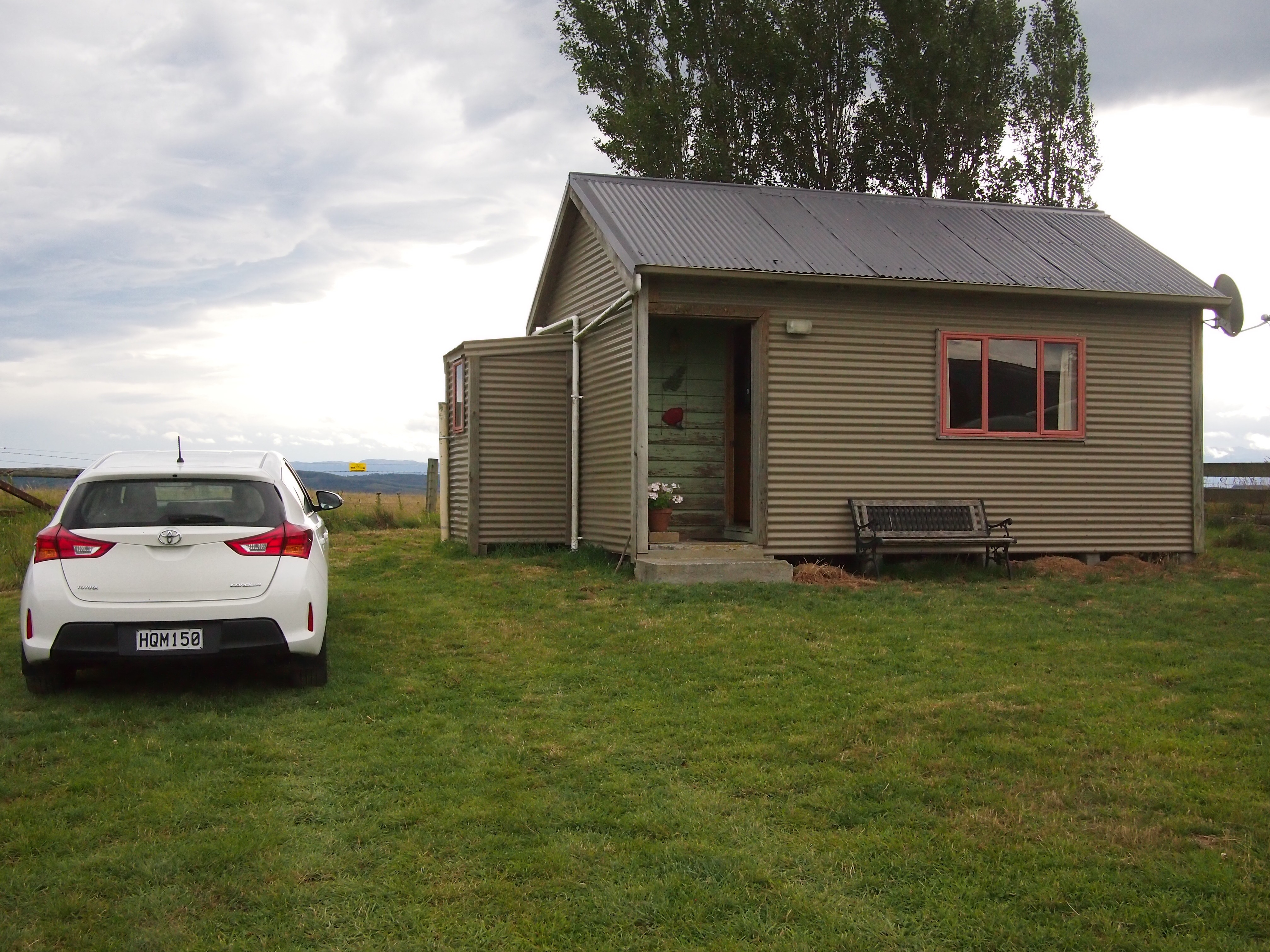 We landed yesterday in Auckland, and after a short wait at the Auckland airport, flew to Queenstown. The breakfast in the Auckland airport was amazing — I had a huge plate of very fresh fruit and Greek yogurt with honey, while Meg had poached eggs and spinach on rye toast. Yum! And really good coffee too — I’ve never seen anything like it at an airport.

The air approach to Queenstown is really convoluted; you fly in through this mountain valley system and then down to the level of the lake. For much of the approach the mountains are above you; it seemed like you could look out the window and be eye-to-eye with a mountain goat, but we didn’t see any.

We recovered for a bit at Nick’s AirBnB in Queenstown, and then walked downtown for a lovely Valentine’s Day dinner at The Public Kitchen, at the marina. That was all family-style; we had flounder and mussels and clams and a wilted green salad and a blue cheese and spinach and carrot salad, finishing it off with more coffee and a huge helping of trifle. Then we walked to the Queenstown gardens, where we poked around a bit. The gardens are pretty but not spectacular — no pictures; I forgot to bring my camera.

This morning we got up and drove out along highway 6 past the south parts of Lake Wakatipu, which was incredibly beautiful. The countryside looks a little like the central California coast, although the mountains are more rugged; we saw a lot of plants that looked very similar. 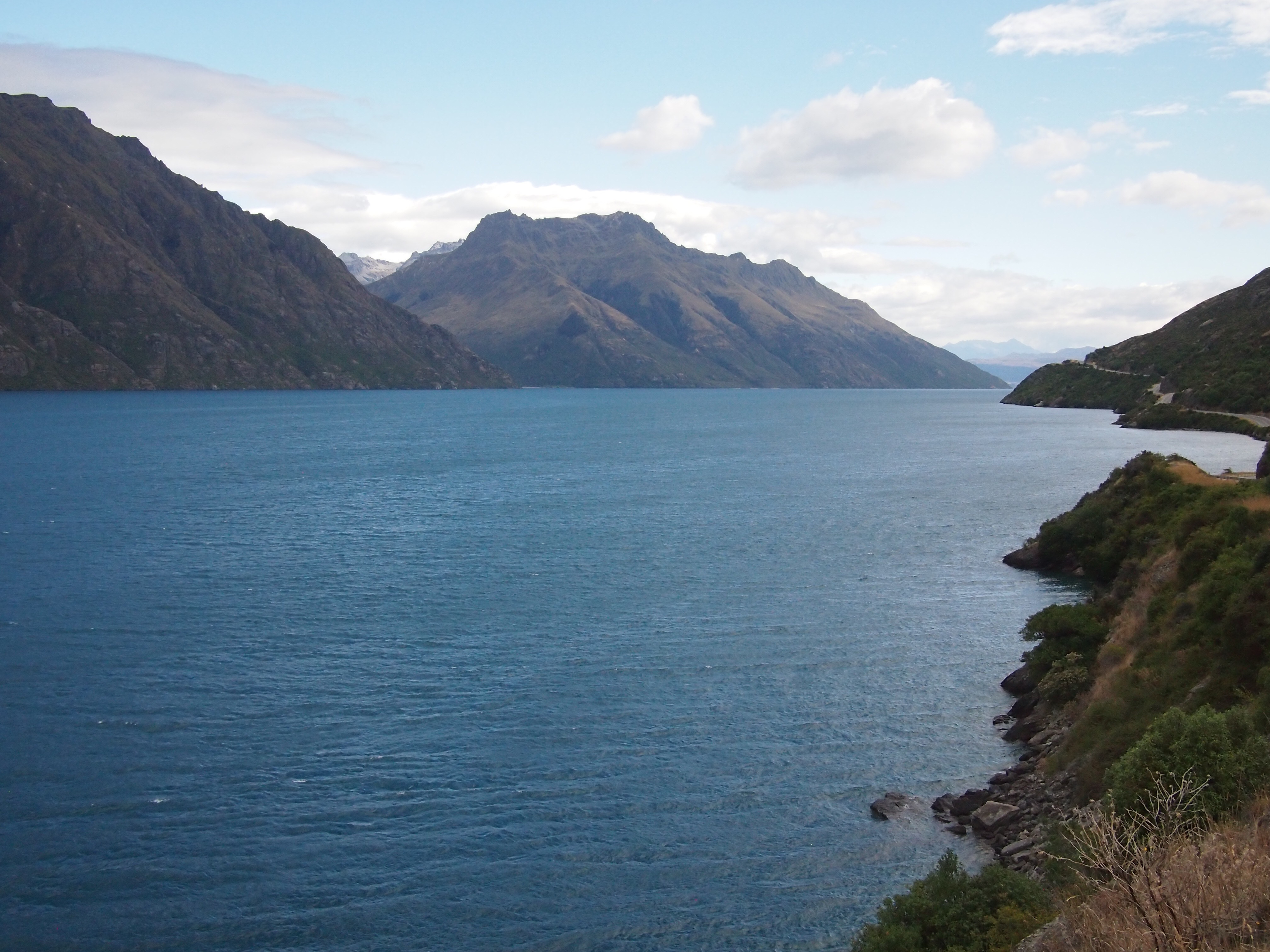 We had lunch at the Cafe Under the Dome in Mossburn, on highway 94, and it’s definitely a place to stop at as well. I had the eggs Benedict, which was three poached eggs instead of two, with bacon. We finished our drive to Te Anau, and arrived at our next AirBnB by about two o’clock.

This side of Lake Te Anau isn’t quite the sight that  Lake Wakatipu is, but it’s still pretty. The AirBnB we’re in is an old Zephyr caravan (camper for Americans), and is very quaint. 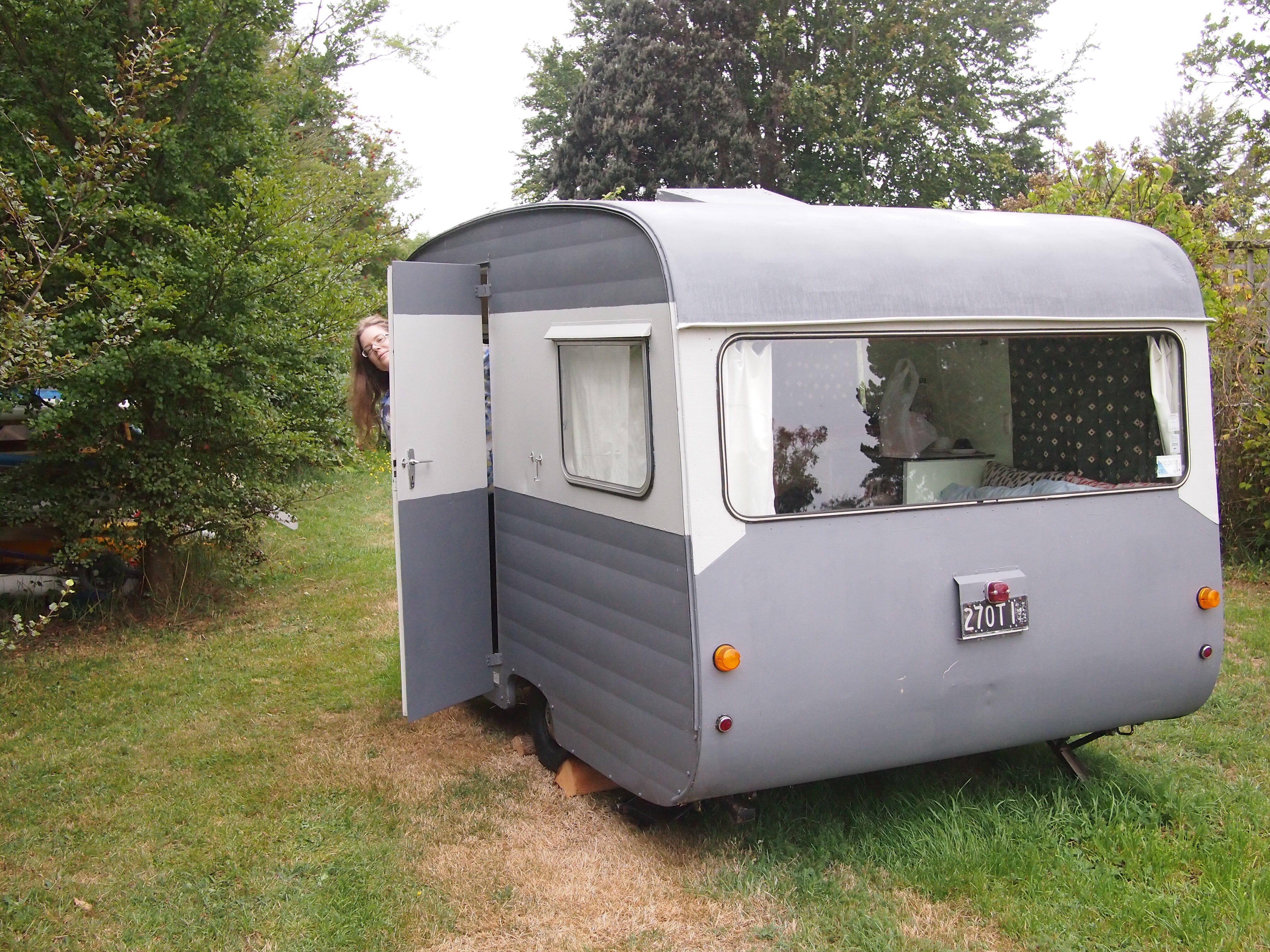 Tonight is dinner in the heart of Te Anau, and tomorrow we’re off to the Millford Sound for a boating excursion.