So, the cassette player thing is going well! I have a small stack of tapes from some great musicians on Bandcamp — if I get organized, I may blog about one or two of my favorites over the holiday weekend.

In the meantime, I wanted to share two podcasts with you: Norelco Mori and Tabs Out. Both are reviews of new cassette music releases — but in many ways cannot be more different.

Before I contrast them and make some general comments, I should say of both of these that they are very well produced. Audio quality is high throughout — clear, well-enunciated voices, little background noise, and good diction and speech. From that perspective, both are a real pleasure to listen to. I’m actually pretty fussy about this — I try a lot of podcasts, and don’t stick with many past the first half episode. If the audio is noisy, has too much echo, or if the speaker(s) voice(s) annoy me, off it goes. Similarly, what’s said and how it’s said is important too — we all “um” and “ah” somewhat, but there’s only so much of that — or just plain bad writing or poorly organized thoughts — that I can take before I want to drive into the opposite lane of traffic and put myself out of my misery. Both Norelco Mori and Tabs Out do very well in all of these regards — they’re what I’d call “professional” quality, on a par with good podcasts released by radio stations and other serious podcast networks like TWiT.

They are, however, very different. Norelco Mori prides itself as a podcast with “minimal talk”, and in that it delivers. The host, Ted Butler, does a bit at the beginning telling you what you’re going to hear, and then there’s about an hour of different works, and then a bit at the end about each artist and their method. Because of this, you can listen as actively or as passively as you wish (although I think you get a lot more from it from active listening). I’ve loved everything featured on the podcast, and it’s been difficult not to go to the computer after listening and just queue up a bunch of orders for new music.

Tabs Out is styled more as a radio program a la radio DJs. Honestly, I have a harder time following it; Mike Haley is joined by other hosts, each obviously with a different personality. I’ve never really enjoyed radio programming like that, and I kept wondering when they’d get to the music when I listened to the first episode I downloaded. When they finally do, they pick good music, though. But the format, for me, makes it harder to follow the music and really absorb their selections. It may well appeal to you, though, especially if you’re a fan of traditional radio programming.

If you’d like to discover some new, interesting music with a twist on cassette releases, they’re both worth checking out. I’m finding it easier to discover new stuff this way than surfing Bandcamp or Soundcloud, probably because my on-line time at home is somewhat limited, and I find most music recommendation algorithms just plain suck when it comes to knowing what I’ll like. These podcasts give me a chance to hear some great work by independent musicians when I’m driving to and from work, and their web sites let me follow up with them when I get a chance. 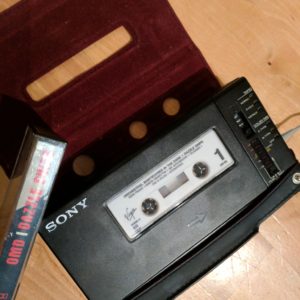