I got out today for the first time since this winter for a real hike — not just a quick walk with the dog, but something that takes more than half an hour and is worth bringing the camera.

I went out to Fall Creek, down in Felton; there’s some nice history along the trail there. In the late 1800’s and early 1900’s, this valley’s economy was driven by lumber and lime — much of early San Francisco was constructed with resources drawn from here. Anyway, up the Fall Creek trail are the remnants of old lime kilns and a limestone quarry run by I.X.L. Lime Company. 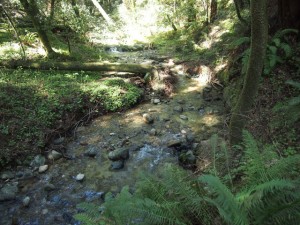 I started out to the lime kilns first; it’s about two kilometers from the parking lot up the South Fork of Fall Creek. The park was packed — I was hiking between a family taking visitors out and a bunch of families with small children.

Once at the lime kilns, I waited until the people had moved on and got some photos. The kilns are huge; they’d pile wood in the bottom and then the limestone over it, and it would apparently burn for days. It must have made an amazing amount of heat. Above the kilns you can see bits of the rail car system used to bring the limestone down to the kilns, although you have to look hard to find it. 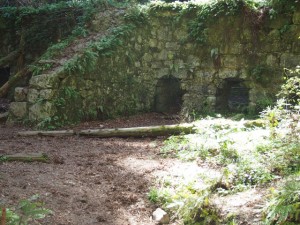 Then I continued past the powder store and up the canyon to the barrel site, where the barrels for the lime were made. This is another couple kilometers from the site; I would assume — although I don’t know — that the primary reason for putting the cooperage where it was was because of the water power needed to run the sawmill, and the trees to cut for the wood for the barrels. There’s still a fair amount of old equipment, too. 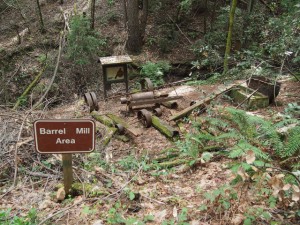 Once there, I walked back along the North Fork of Fall Creek. Hiking along the creek is an interesting experience; the photos don’t really do it justice, but you’re usually sandwiched between canyon walls separated by tens of meters, with the trail sharing the bottom of the canyon with the creek. The creek’s eroded the base of the canyon and the trail quite a bit; there’s lots of places where you cross the creek, or have to trek up the canyon wall a few meters and back down because a shift in the creek has eroded the logical place for the trail.

I took quite a few photos, although none of them really capture the size of the trees or creek canyons. You can see them in my photo album.

Overall, a good day to be out!

Well, gee, it’s been eight months without a post. If you were hoping for wisdom about Yesod, I’m really sorry that I let you down.

Shortly after starting the project, I learned that my day job at Nokia Research Center was going away — specifically, Nokia was closing the lab that I worked at, and I would be looking for another job.

Thanks to several supportive people — among them, my boss at Nokia and his boss — I landed fairly quickly on my feet with others I’d worked with before, at Microsoft, working in the division that’s responsible for a lot of cool things for Bing. It’s been a great transition, but it’s been like drinking from a firehose — I lived a very sheltered life, well away from a lot of mainstream Microsoft technologies (SQL Server, ASP.NET, and ASP.MVC, I’m looking at you!) and in addition to my regular work responsibilities in my new role, most of my learning cycles have been coming up to speed on the latest enhancements to C#, the various public and private frameworks I use in my new job, and so forth. Under the circumstances, something had to give, and Yesod was that something.

I’ve thought a few times about making this another Microsoft technology blog, but there are an awful lot of them, and I’m starting behind where many, many good bloggers are. About half of the epiphanies I’ve had about programming for the twenty-first century Microsoft platform would be old hat to most of you, and the rest probably don’t care — you’re probably still using Qt on Ubuntu or something like that.

At the same time, there’s been no work towards the next book, which was always the purpose of this blog — to cross-pollinate between what I did at work, what I wrote for you in print, forging a connection between the two. That’s not to say there aren’t more books coming at some point; in fact, I’m incubating a couple of ideas now. But they’re in the incubation stage, and publishers generally like freshly baked content, not content that’s been posted for free on the Internet first. (Can you blame them? I can’t.)

But stay tuned. More is coming; I’m just not quite sure what or when yet.